Gender and diversity sensitive humanitarian action is crucial for impact, accountability and effectiveness within the Red Cross and Red Crescent Movement. In practice, it means transparently identifying and meeting the needs of the most vulnerable in our communities (whether men, women, girls, boys, persons with disabilities and no matter a person’s age, socio-economic status, gender identity or sexual orientation); and consistently ensuring that our work is underpinned by human dignity, equitable access to services, community participation and beneficiary safety (including from Sexual and Gender-based Violence).

Sexual and gender-based violence (SGBV) is a life-threatening, global health and human rights issue. In December 2015, the Red Cross and Red Crescent Movement adopted the joint Resolution on Sexual and Gender Based Violence: Joint Action on Prevention and Response. The Resolution outlines specific responsibilities for States, National Societies, IFRC and the ICRC in prevention and response to SGBV. One of the key elements of the resolution is to strengthen the capacity of Red Cross and Red Crescent staff and volunteers to prevent, mitigate and respond to SGBV in emergencies. Subsequently, the IFRC has developed a global training module on SGBV that will be rolled-out in the Asia-Pacific region during 2017. Before the training in Southeast Asia, this training has been pilot tested with the South Asia network in May 2017 and with the Pacific network in July 2017 and feedback incorporated to enhance the training modules. This training builds on important ongoing work in Southeast Asia on this issue, including the IFRC Sexual and Gender Based Violence research in disasters, in collaboration with ASEAN. This research is being conducted in the Philippines, Indonesia and Laos PDR in 2017 and continues the work undertaken through the “Unseen Unheard” case study in Myanmar, Samoa and Bangladesh. 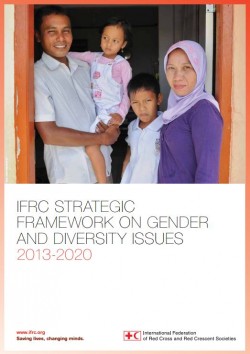 The document provides specific, strategic direction to the IFRC to ensure that its actions are non-discriminatory towards people of all ages, and to promote gender equality and respect for diversity throughout all of its work. 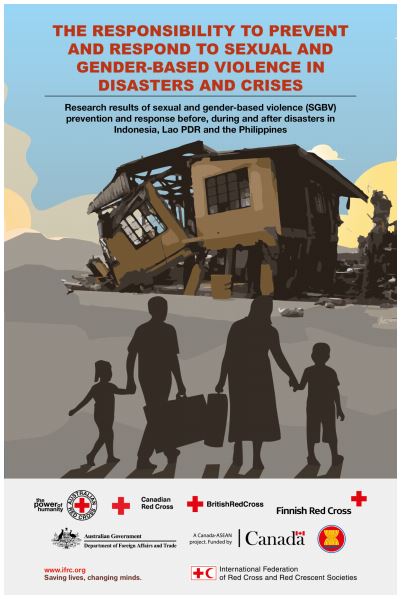 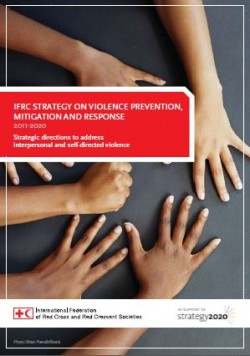 This document provides direction to National Societies and the Federation to support the aims and enabling actions of the IFRC Strategy 2020 in relation to self-directed and interpersonal violence, including urban violence. 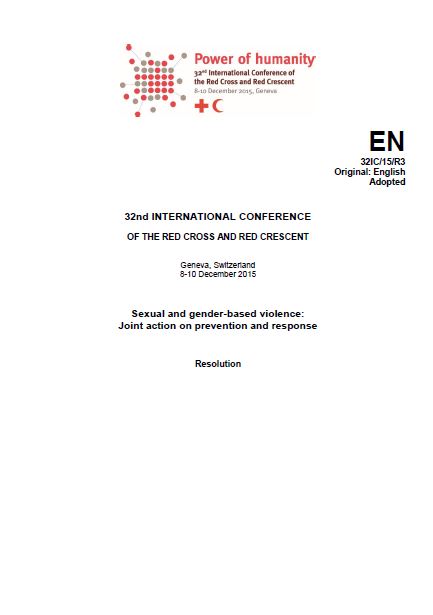 This resolution on Sexual and gender-based violence: Joint action on prevention and response was adopted on the 32nd International Conference of the Red Cross and Red Crescent in December 2015. 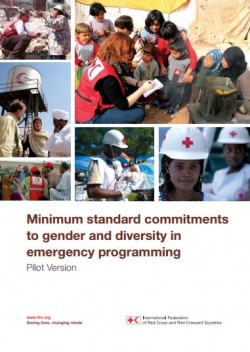 The Minimum Standard Commitments for each sector are based around a framework of: dignity; access; participation; safety; and internal protection systems. The checklist provides specific indicators which an organisation can use to rate its progress (achieved, partially achieved, not achieved and not applicable), justify its score and propose next steps. This checklist provides a quick tool for assessing compliance with the Minimum Standard Commitments in Emergency Programming for Red Cross / Red Crescent staff and volunteers in: emergency health; food security; water, sanitation and hygiene; emergency shelter; livelihoods; non-food items and disaster risk reduction. It serves as a tool for organisations to mark progress and identify their next steps. 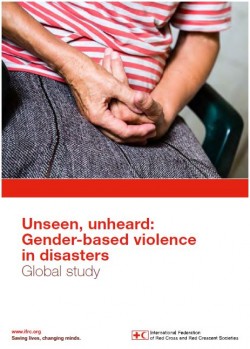 The study is designed to foster the recognition that gender-based violence (GBV) is a major feature of many conflicts and understanding its occurrence during disasters. 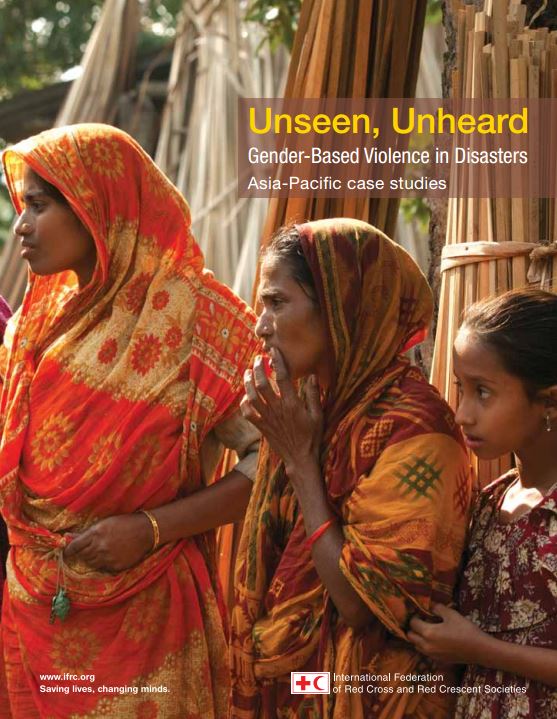 This report follows on from the global study Unseen Unheard: gender based violence in disasters which saw research being conducted in 9 countries globally, and included Bangladesh, Myanmar and Samoa from the Asia Pacific region. The Asia Pacific case studies provide an overview of gender-based violence (GBV) within each country context, as well as presenting findings and key recommendations with regards to 1) Awareness and understanding on GBV occurrence during disasters; 2) Availability and access to services; 3) Safety and security and; 4) Livelihoods and migration.

Sexual and gender based violence related online courses available on IFRC Learning Platform (log in and password are required) are: 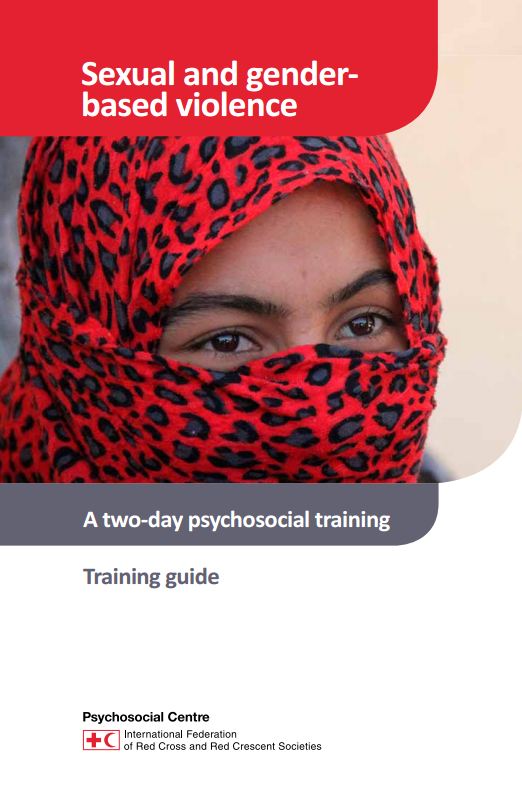 This guide is a basic introduction to understanding sexual and gender-based violence (SGBV) in a psychosocial context. It provides information about different types of SGBV, as well as practical guidance on psychosocial support related to SGBV. It also provides participants with skills and knowledge on how to handle disclosures of SGBV and how to provide psychosocial support to people affected by SGBV. 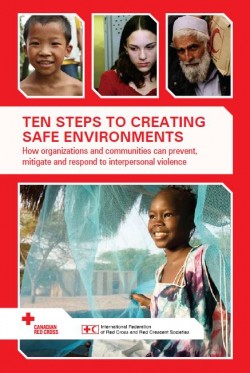 Ten steps to creating safe environments: How organisations and communities can prevent, mitigate and respond to interpersonal violence

Purpose This document is a resource for organisations and communities to help in the development, implementation and monitoring of concrete actions to prevent, reduce, mitigate and respond to interpersonal violence—physical, sexual, emotional and neglect. Overview The ten steps are: 1. Understand… 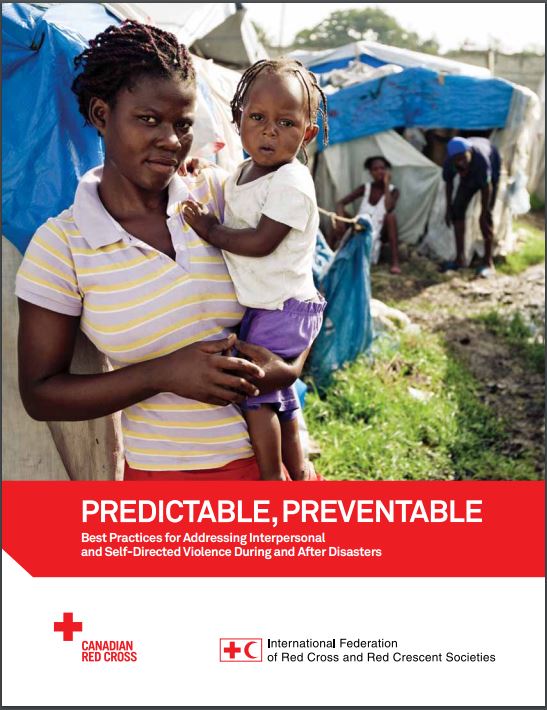 Predictable, Preventable: Best Practices for Addressing Interpersonal and Self-Directed Violence during and after Disasters

This advocacy report encourages making the prevention of interpersonal and self-directed violence a priority within the International Federation’s response to disasters. It highlights why and how interpersonal and self-directed violence during and after disasters is a predictable and preventable problem and the actions the International Federation and its partner agencies should take to have a more engaged role in addressing them. 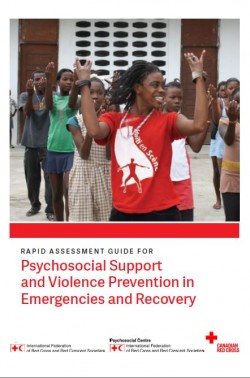 This guide provides standards and directions on how to carry out rapid needs assessment for Psychosocial Support (PSS) and Violence Prevention (VP) initiatives including child protection and sexual and gender-based violence.

In particular, this rapid assessment tool is designed to help gather data in an efficient and effective way to help inform integration of PSS and VP issues, as minimum standards, into the broader disaster management action plans in response to an emergency. 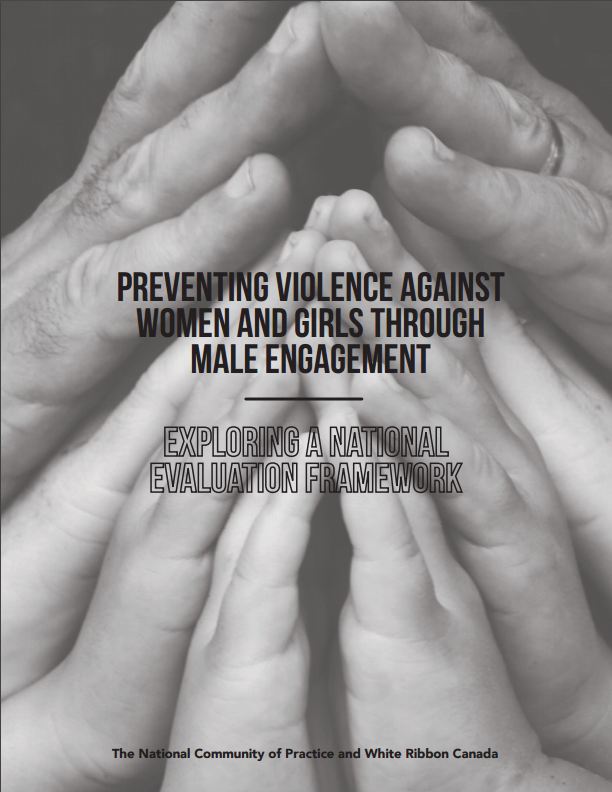 In October 2013, White Ribbon began coordinating a National Community of Practice composed of organisations with projects funded by Status of Women Canada’s ‘Working Together: Engaging Communities To End Violence Against Women And Girls’. The Community of Practice focused on sharing lessons learned, challenges and enabling factors in engaging men and boys to help prevent gender-based violence.
One of the three main activities was the development of a National Evaluation Framework (NEF) to identify shared results across programmes and provide an evaluation resource tool for others in the gender-based violence prevention sector. 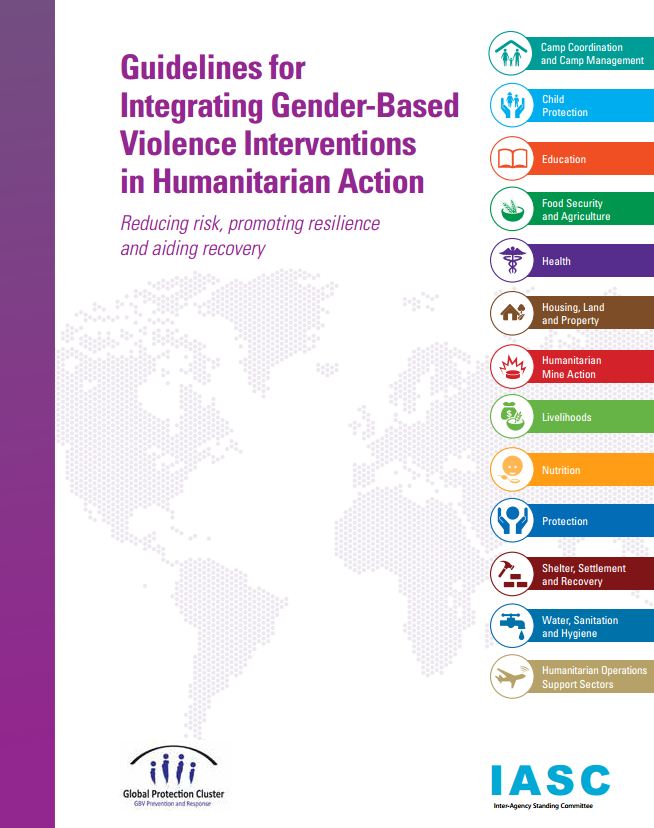 This document provides practical guidance and effective tools for humanitarians and communities to coordinate, plan, implement, monitor and evaluate actions for the prevention and mitigation of gender-based violence throughout all stages of humanitarian response, from preparedness to recovery. 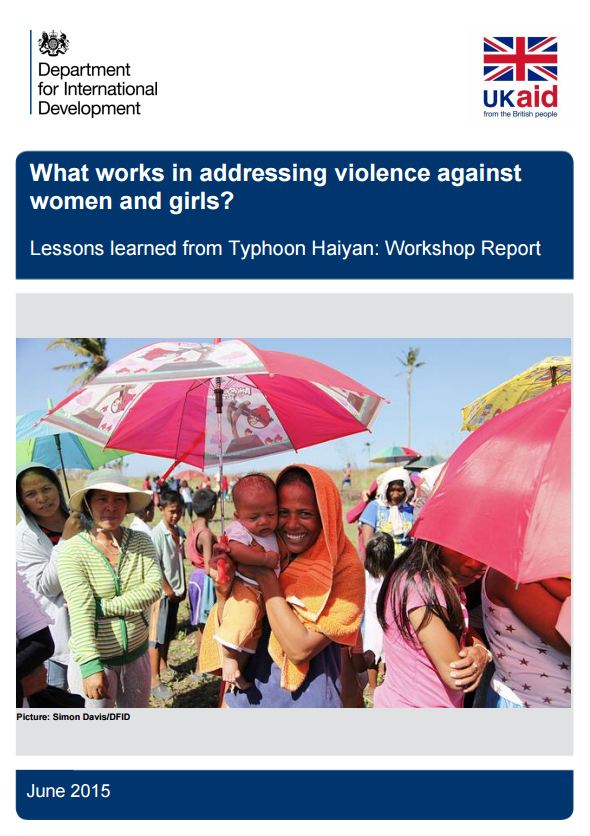 What Works in Addressing Violence against Women and Girls: Lessons Learned from Typhoon Haiyan

This document summarises the recommendations and discussions from a workshop hosted by the Department for International Development (DFID) on 9 June 2014. The purpose of the workshop was to build consensus on what did and didn’t work to help prevent and respond to violence against women and girls in the Philippines after Typhoon Haiyan hit in November 2013. 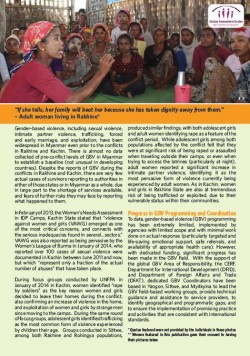 This document provides an overview of gender-based violence (GBV) in Myanmar. It looks at progress in GBV programming and coordination and provides recommendations for action against GBV. 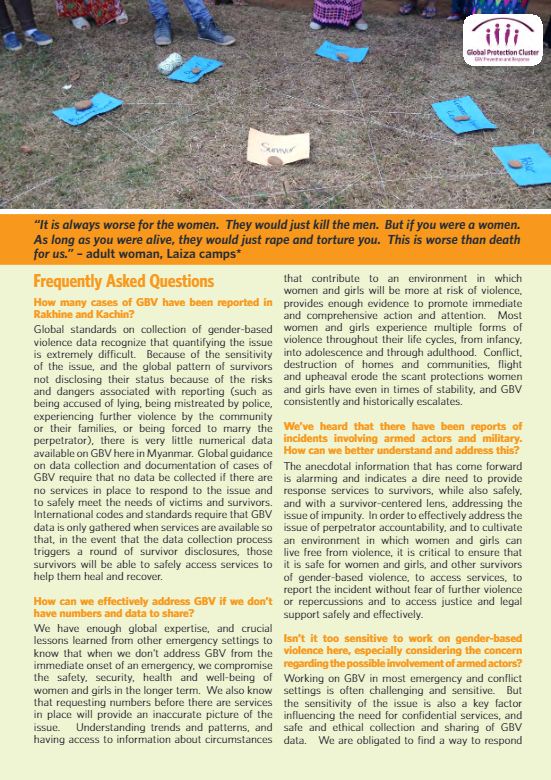 This document outlines the current situation regarding gender-based violence in Myanmar in the form of ‘frequently asked questions’. 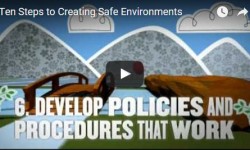 Purpose This video provides an overview of the Canadian Red Cross Tool  ’ Ten steps to creating safe environments for children and youth’ Overview The ten steps are: Be aware: Understanding abuse, violence, bullying, and harassment. Look all ways: recognising… 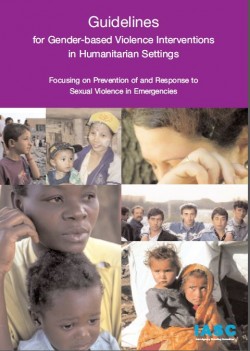 Guidelines for Gender-Based Violence Interventions in Humanitarian Settings: Focusing on Prevention of and Response to Sexual Violence in Emergencies

Purpose The primary purpose of these guidelines is to enable humanitarian actors and communities to plan, establish, and coordinate a set of minimum multi-sectoral interventions to prevent and respond to sexual violence during the early phase of an emergency. Overview… 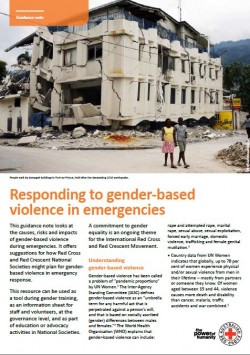 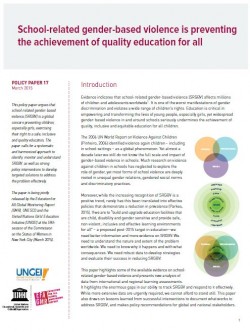 Purpose This paper highlights some of the available evidence on School-Related Gender-Based violence (SRGBV) and presents new analysis of data from international and regional learning assessments. It highlights the gaps in our ability to track SRGBV and respond to it… 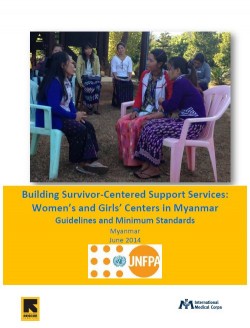 This document offers a brief practical guide to the characteristics and functions that an ideal women’s and girls’ centre in a humanitarian context could have in order to adequately respond to the needs of women and girls.

The information included in these guidelines is derived primarily from UNFPA’s work with women and girls in Rakhine and Kachin states. The foundational approach contained in the guidance can however be applied, and adapted, to a variety of contexts. 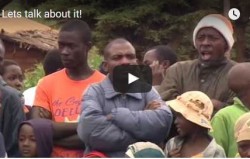 Purpose This film describes Malawi Red Cross (MRCS) leading efforts, in partnership with UNHCR, to rally the Dzaleka Refugee camp community against Gender Based Violence (GBV). Overview Some of the challenges faced by women include abuse by their spouses, and… 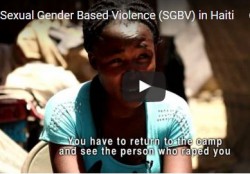 Purpose This video looks at the dangers people, especially women and girls face in camps after the earthquake in Haiti. Overview Women in the camps are exposed to many dangers including rape. Few of these incidents are reported because women… 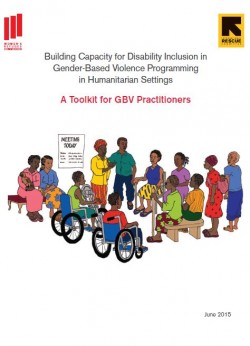 Purpose The toolkit contains 12 tools designed to support gender-based violence (GBV) staff to build disability inclusion into their work, and to strengthen the capacity of GBV practitioners to use a survivor-centred approach when providing services to survivors with disabilities.… 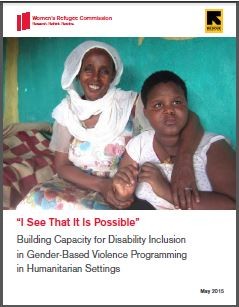 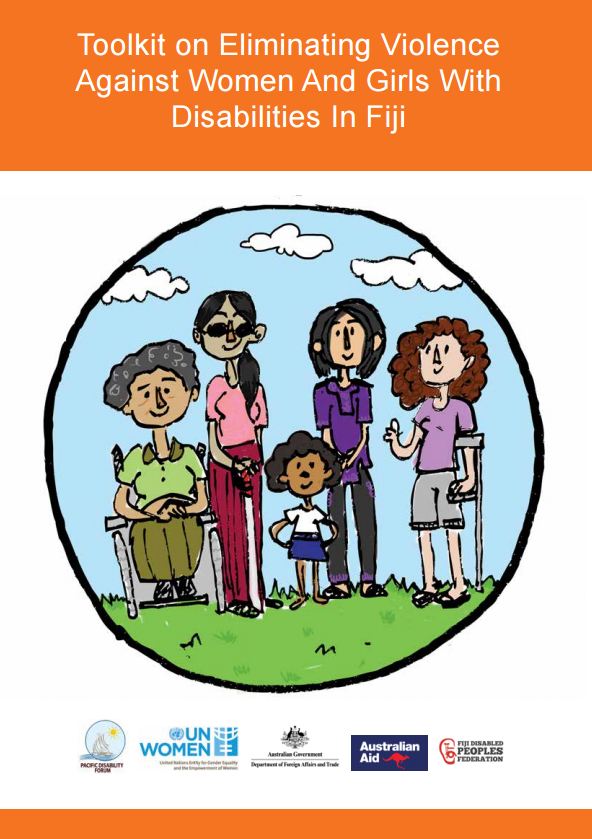 This toolkit seeks to: raise awareness on violence against women using a human rights-based approach, increase understanding of the barriers faced by women and girls with disabilities that experience violence, and show people how they can assist in the elimination of violence against women.