For World AIDS Day 2016, Thai Red Cross AIDS Research Centre (TRCARC) brought World AIDS Day to life in the communities by organizing special events to raise awareness of the role that individuals and communities could play in preventing the spread of HIV. The events promoted Free HIV testing and encourage individuals and their partners to know their HIV status at Anonymous Clinic and in the prison in Pathumthani province, and screening and discussion of VD, TB and Hepatitis B & C. Also occurred was activities to disseminate HIV/AIDS information to the public following the UN’s theme for this year’s World AIDS Day which is Hands Up for #HIV Prevention. 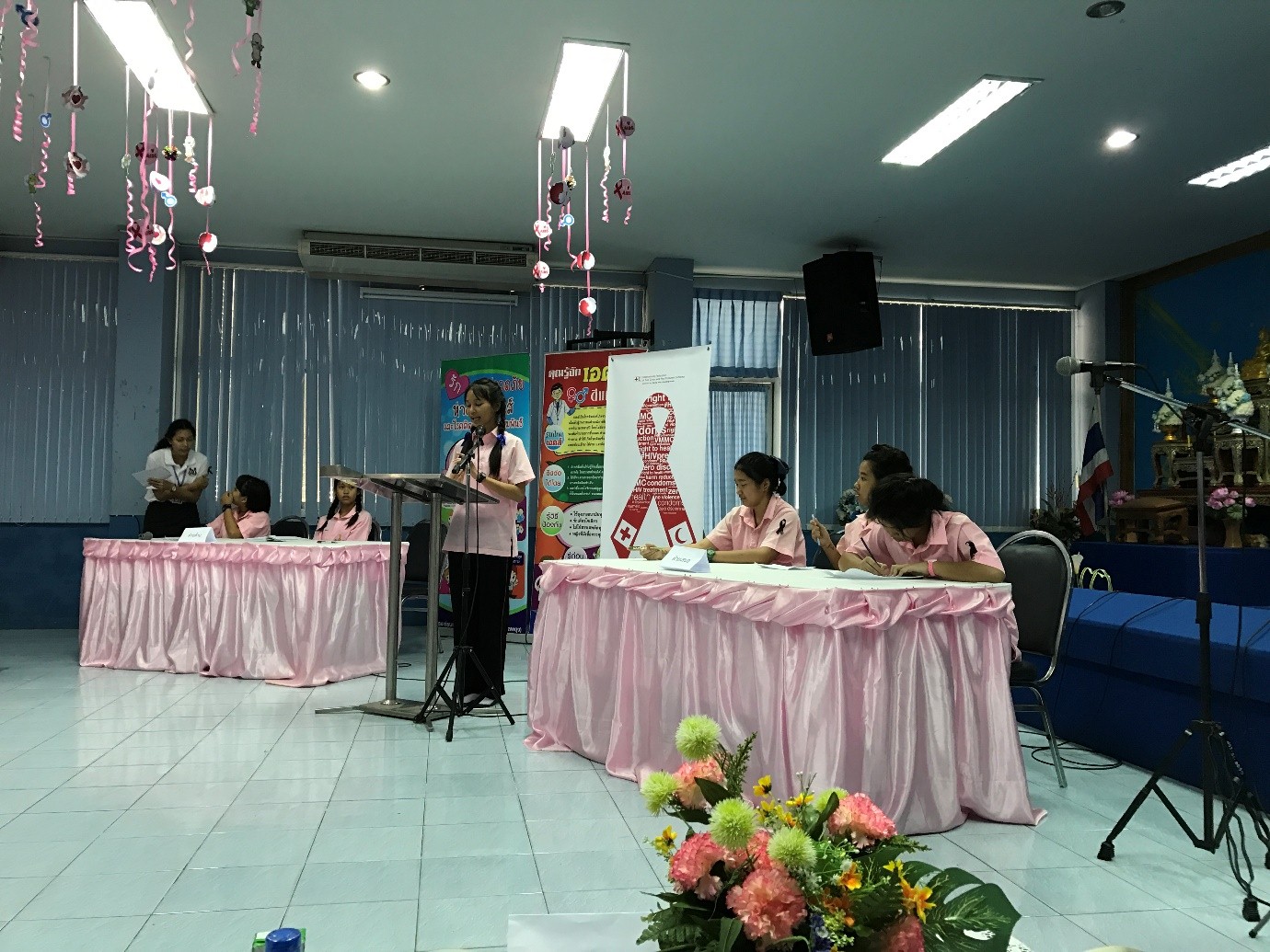 3. Students Debate & Debunk HIV Myths at Tessaban 2 Wat Saneha School in Nakhon Pathom province. This province, located approximately 70 kilometers away to the South of Thailand from Bangkok was chosen for several reasons; the first being that it is one of the zones where TRCARC presently work for Harm Reduction, and the second being that TRCARC wanted to bring our message of HIV/AIDS education to an area with low socio-economic. 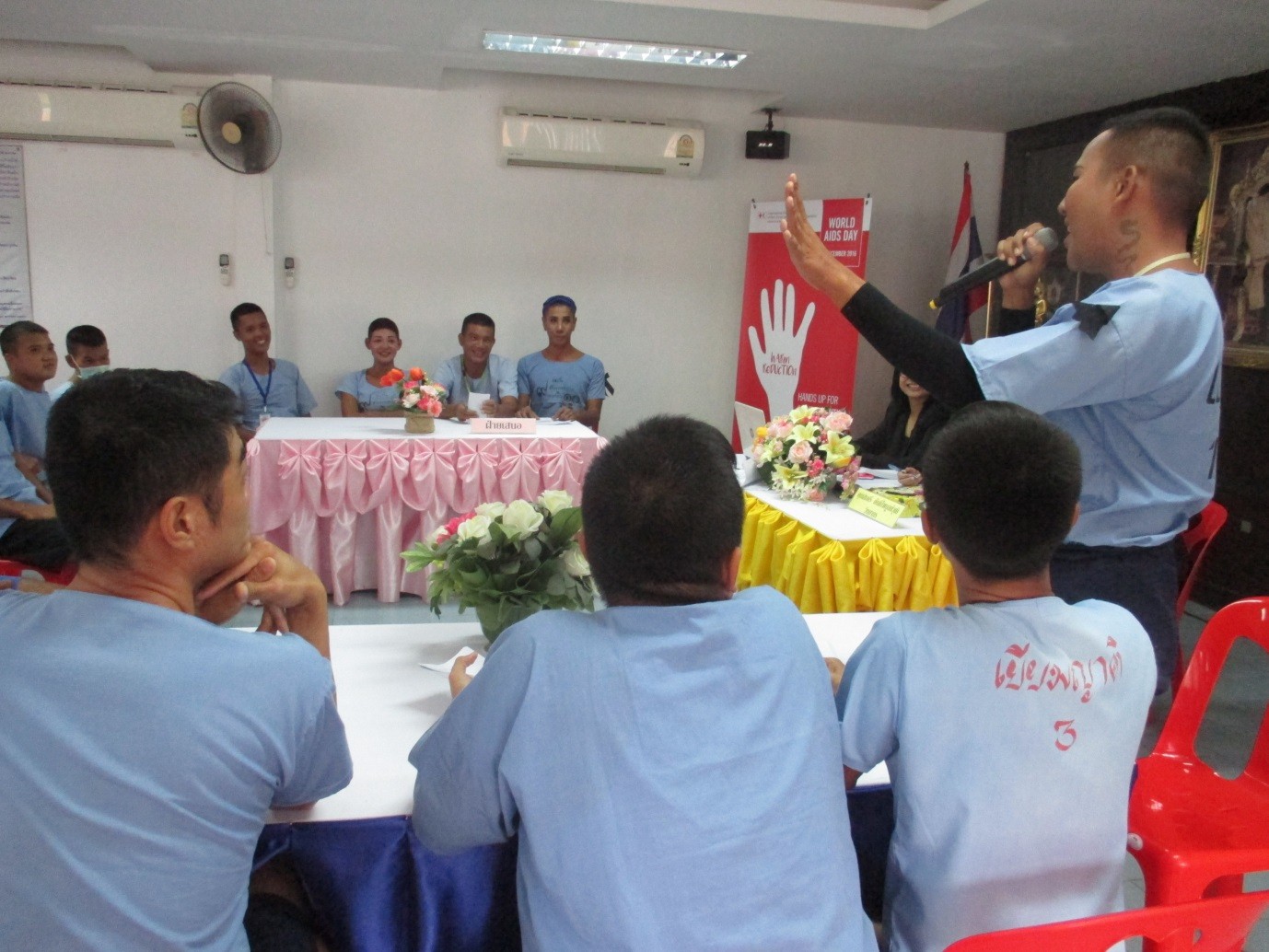 4. Prisoners Debate & Debunk HIV Myths at the prison in Prathumthani Province. This province, located approximately 60 kilometers to the North of Thailand from Bangkok was chosen for several reasons; the first being that it is one of the zones where TRCARC presently works for Harm Reduction, and the second being that TRCARC wanted to bring our message of HIV/AIDS education to an area where there is drug use. There were a debate, an exhibition and a quiz session.

Outcomes
• Using of the social networking sites to bridge communication among a diverse range of users, in various geographic and social contexts, leveraged through pre-existing platforms and with attention to the roles of anonymity and confidentiality in communication about HIV prevention and treatment, continues to increase and becomes more widespread.
• 172 people got free HIV testing on World AIDS Day.
• The event was well attended. A total of 1,714 students in the school came including upper secondary school students, teachers, villagers authorities, district government staff and TRCARC staff.
• 100 students and 100 prisoners were able to identify and discuss basic truths and myths surrounding HIV. They highlighted the importance of education as a preventive measure against HIV/AIDS.
• Distributed condoms and lubricant, printed with “PrEP helps prevent HIV” message with the key facts about HIV/AIDS on the back, which promoted practical link between HIV/AIDS and safe sex.
• Students campaigned for World AIDS Day in public by wearing the campaign t-shirts especially produced for the occasion.
• The audience actively engaged with the debate showing laughter and applause. It was expected that this activity helped to increase HIV/AIDS knowledge. It is hoped that people change their attitude and behavior towards people living with HIV (PLHIV) as the drama performance showed people how to support PLHIV.
• Participants in the quiz session demonstrated good knowledge of the HIV/AIDS information presented.
• The materials distributed to the audience and displayed in the exhibition were well received. We hope that the provision of this information helps to provide ongoing support to increase knowledge and change individuals and communities behaviors and attitudes.