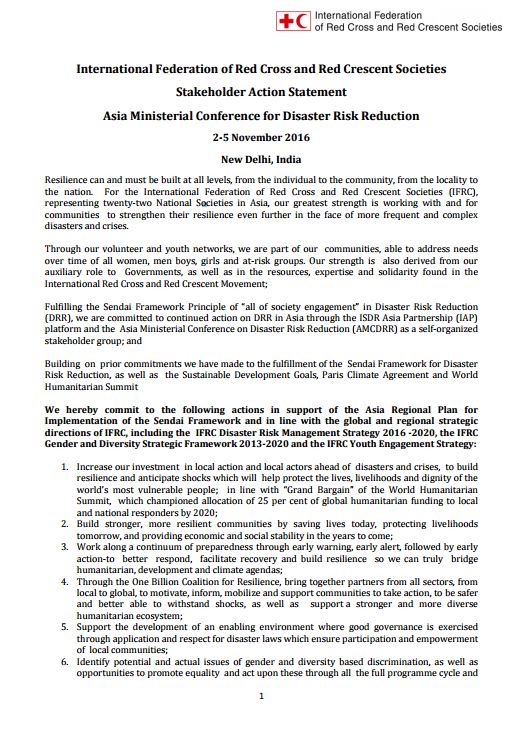 The IFRC’s Statement of Action, sets out the collective commitments and actions that Red Cross and Red Crescent National Societies across Asia will deliver according to the priority areas of the Sendai Framework.

These include providing greater support to local humanitarian and development actors, addressing issues around social inclusion and diversity in disaster risk reduction, establishing stronger laws and frameworks that reduce vulnerability to disasters and elevating the role of young people as agents of behavioural change in their communities. 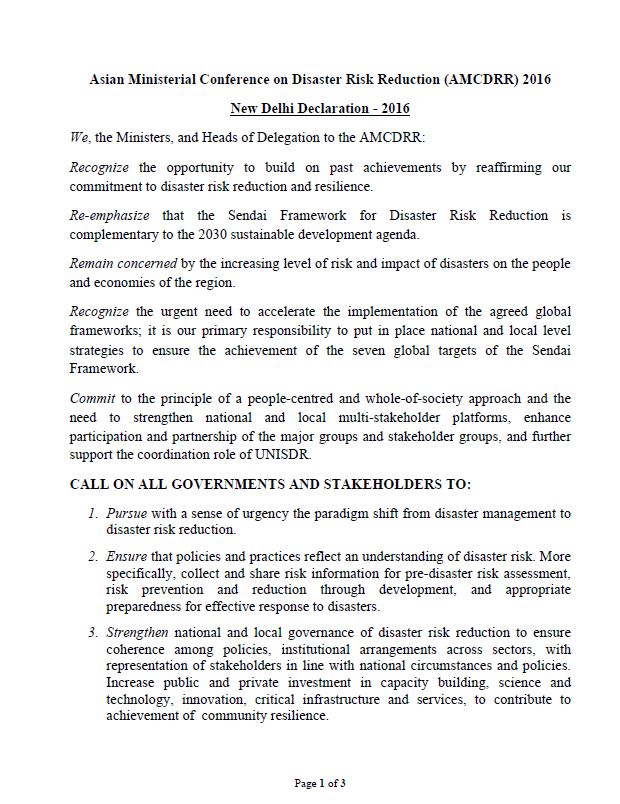 The New Delhi Declaration adopted on 5 November 2016 in New Delhi, India, in the AMCDRR 2016, consolidates the political commitment of governments towards preventing and reducing risk as well as strengthening resilience by accelerating implementation and monitoring of the Sendai Framework in the region. The Asia Regional Plan seeks to guide and support the national implementation of the Sendai Framework, but is not a replacement of national plans. It does so by identifying priorities at regional activities to support national and local actions, enhance exchange of good practice, knowledge and information among governments and stakeholders, in addition to strengthening regional cooperation to support the implementation of the Sendai Framework.

This regional plan aims to provide:

This regional plan is one of the main outcome documents of the AMCDRR in November 2016 in New Delhi, India.

The regional plan details, among which,: This document maps out the broad strategic direction that will guide the implementation of ASEAN Agreement on Disaster Management and Emergency Response (AADMER)over the next ten years.

The AADMER, which came into force in December 2009, set the foundation for regional cooperation, coordination, technical assistance, and resource mobilisation in all aspects of disaster management and emergency response. The Agreement supports ongoing and planned national initiatives of ASEAN Member States, and with supporting and complementing national capacities and existing work programmes. Since its inception and through various initiatives, ASEAN through AADMER has managed to increase both regional and national capacities for responding to disasters in Southeast Asia.

Through these three mutually-inclusive strategic elements, this policy document proposes to position ASEAN as a pioneer in transforming disaster management landscape in the Southeast Asian region and beyond, and strengthen its leadership to maintain ASEAN Centrality. 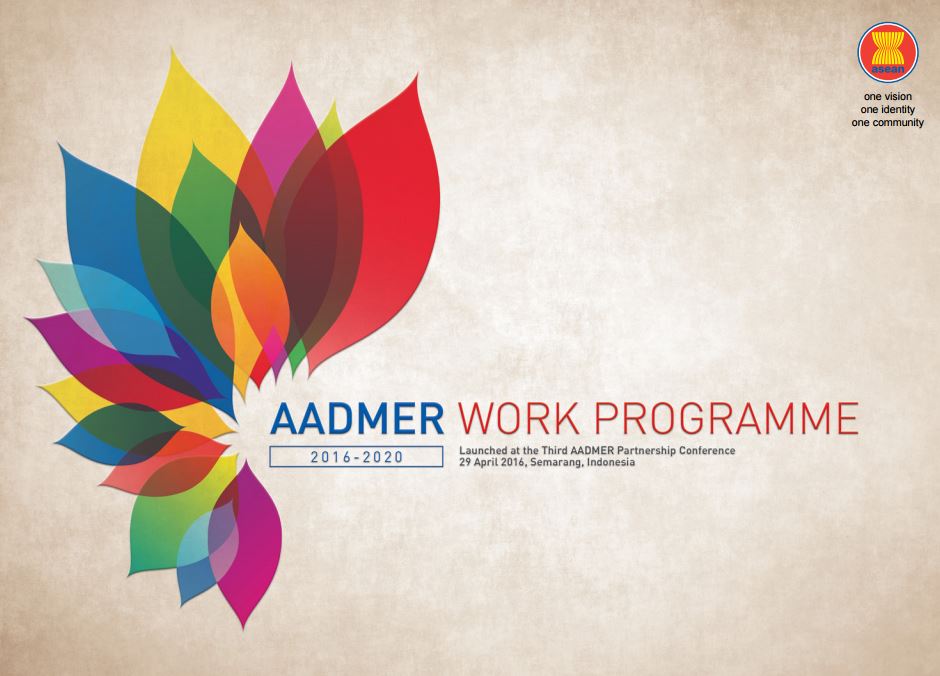 The work programme was launched in the 3rd AADMER Partnership Conference in April 2016, Semarang, Indonesia.

The ASEAN Agreement on Disaster Management and Emergency or AADMER has been effectively facilitating regional cooperation between and among ASEAN Member States since its entry into force on 24 December 2009. As the legally-binding regional agreement in ASEAN, AADMER has directly contributed to the building of ASEAN Community, and the enhancement of disaster risk reduction and climate change adaptation of the
peoples and communities in ASEAN.

In the next ten years, the vision of ASEAN on disaster management looks at three  strategic elements:

The AADMER Work Programme 2016-2020 differs from the previous work programme in terms of having a more pronounced articulation of protecting the gains of ASEAN Community integration for the peoples and communities of ASEAN, and showcasing ASEAN’s leadership and experience. It continues to put the premium on the contribution to and ownership of ASEAN Member States of the initiatives embodied in the new work programme; and the significance of engaging multiple sectors and stakeholders while maintaining ASEAN Centrality to ensure policy and programme coherence.

The 8 Priority Programmes, with the specific objectives and outputs outlined in this work plan, are: This Federation-Wide Resource Mobilization Strategy (the Strategy) aims to help the Red Cross and Red Crescent (RCRC) National Societies (NS) around the world to build on our strengths and competitive advantages in resource mobilization, while eliminating practices that undermine national and global resource mobilization capacities and objectives.

Working individually and together, we, can maximize resource mobilization opportunities to realize the strategic aims of Strategy 2020 for the International Federation of Red Cross and Red Crescent Societies (IFRC).

Drawn from the enabling actions of Strategy 2020, the goals of the Strategy are to:

Achieving these goals will enable the International Federation of Red Cross and Red Crescent Societies (National Societies and their secretariat) to maintain its position as the world’s largest humanitarian network, ensuring the availability of resources to do more, do better and reach further.

The Strategy is driven by five critical challenges that the IFRC must address to remain the world’s leading humanitarian network:

The Strategy is informed by the following guiding principles: The Paris Agreement builds upon the Convention and – for the first time – brings all nations into a common cause to undertake take ambitious efforts to combat climate change and adapt to its effects, with enhanced support to assist developing countries to do so. As such, it charts a new course in the global climate effort.

The Paris Agreement’s central aim is to strengthen the global response to the threat of climate change by keeping a global temperature rise this century well below 2 degrees Celsius above pre-industrial levels and to pursue efforts to limit the temperature increase even further to 1.5 degrees Celsius. Additionally, the agreement aims to strengthen the ability of countries to deal with the impacts of climate change. To reach these ambitious goals, appropriate financial flows, a new technology framework and an enhanced capacity building framework will be put in place, thus supporting action by developing countries and the most vulnerable countries, in line with their own national objectives. The Agreement also provides for enhanced transparency of action and support through a more robust transparency framework.

In November and December 2015, the 21st Conference of the Parties to the United Nations Framework Convention on Climate Change (UNFCC COP21) took place in Paris. UNFCC is an international environmental agreement on climate change, of which there are 195 States Parties. The agreement is due to come into force in 2020.

Some key points of the agreement:

Before and during the Paris conference, countries submitted comprehensive national climate action plans (National Determined Contributions – NDCs). These are not yet enough to keep global warming below 2°C, but the agreement traces the way to achieving this target.

Loss and damage. The agreement also:

For more information, see UNFCCC website and e-handbook (explanation) on the Paris Agreement This Strategy is intended to support National Societies (NS) strategic decision-making and planning as well as align local and national level disaster risk reduction. Having a region-wide alignment of actions will allow NS to work better together and support each other in times of disasters and crisis. This document will also support the planning of IFRC Secretariat Support to NS at various stages of the NS Development.

The Strategy outlines four strategic directions and lists a set of key actions with some examples of associated impact and indicators to measure progress towards achieving the stated directions. Each National Society will contextualize this strategy to fit into their humanitarian challenges, their identified needs and priorities as well as capacities.

The strategy has 4 strategic axes: