In line with IFRC’s Global Water and Sanitation Initiative (GWSI2005-2025), Cartier Charitable Foundation established partnership with IFRC to support and address water, sanitation and hygiene (WASH) needs of communities through community-based and community-driven approaches in:

The strategy of the project to achieve objectives is to reduce the health risks by improving access to safe sustainable water supplies, sanitation facilities and promoting hygiene practices for 22 communities (23,734 persons) in Cambodia and 22 communities (26,425 persons) in Myanmar by contributing towards:

Cartier Charitable Foundation with IFRC will enhance coordination mechanisms of each National Society. A community-based approach will be adopted as the most effective means of empowering communities to manage their own water supply schemes and sanitation facilities. Active participation of district stakeholders and the beneficiary communities will be ensured from the very beginning and at every stage of the project cycle. The beneficiaries are the main actors of the project in implementation, monitoring and evaluation and managing of schemes and their sanitation facilities. During focus group discussions (FGD), beneficiaries will ensure contribution of locally available resources for construction of projects. Collaboration and linkages among partners will be strengthened to ensure effective coordination at all levels of the programme implementation.

Similarly, both Cambodian Red Cross and Myanmar Red Cross Society will work in close collaboration with their respective local governments that are responsible for the project area to ensure targets are being met as per the local and national priorities. To maximise the impact of this project an integrated  WASH approach is proposed with a strong emphasis in capacity building, coordination and within the bounds of good integrated water resource management (IWRM) practices at the community and catchment level. During project implementation, all users within communities including men, women, children, boys, girls, people living with disabilities, and other marginal groups will be involved to build sense of ownership. To protect and manage water supplies, the agriculture and rural development offices will construct soil and water conservation measures (bunds and check dams) in upper catchments of the water supply scheme and planting of trees around water sources not only as protection but also to mitigate the effects of soil erosion again as a good IWRM measure.

Construction and completion of 89 household sanitation (462 people) through direct support.

Red Cross Volunteers meeting on program issues and achievement: the meeting was organised to understand the issues regarding the programme and various achievement and quarterly progress of the programme.

Quarterly progress was discussed with volunteers and staff of sub provincial branch.

The households contributed man-days for:

17-18 May 2017:
Hygiene Promotion Awareness and Education session for treatment methods for safe water, and environment cleaning awareness at the schools and communities A 2-day home visit was conducted to create awareness regarding the treatment of water and safe storage at Talus, Boseleau Krom village of Boseleau commune, Chitr Borei district.Approximately 92 households visits were conducted and 32 households participated in the village cleaning exercises. 19-21 May 2017: Constructions of water facilities were completed with 3 shallow tube wells in Por and Lovea village. The time schedule for completion of activity is July 2017. It will benefit approximately 280 households. Currently the water sources, locations and land titles have been identified and transferred. 45 participants were trained in 3 different sessions in 4 villages of Chantrea district.

RCV quarterly meeting on programme issues and achievements
An RCV meeting was organised to understand the issues regarding the programme and various achievements and quarterly progress of the programme. The following issues were identified:
a) Accessibility of the villages during the rainy season; the condition of the roads make them inaccessible.
b) Progress of water sources were delayed due to rainy season.
Quarterly progress was discussed with RCVs and staff of sub-provincial branch and recommendations and additional PHAST and HP toolkits were provided to RCVs.

3. Bantey Mean Chey province
17-19 may 2017: IFRC, Cambodia Red Cross – National Headquaters and the local authorities jointly had monitoring visit of the project areas: The 3-day visit focused on the progress of construction of ponds, shallow wells and household sanitation, and identified the challenges faced by RCVs and staff with coordination by the local authorities. 20-24 April, 2017: Organizing of hygiene promotion awareness and education session on treatment methods for safe water and environment cleaning awareness at the communities.
Awareness sessions were conducted during four days at the following four villages: 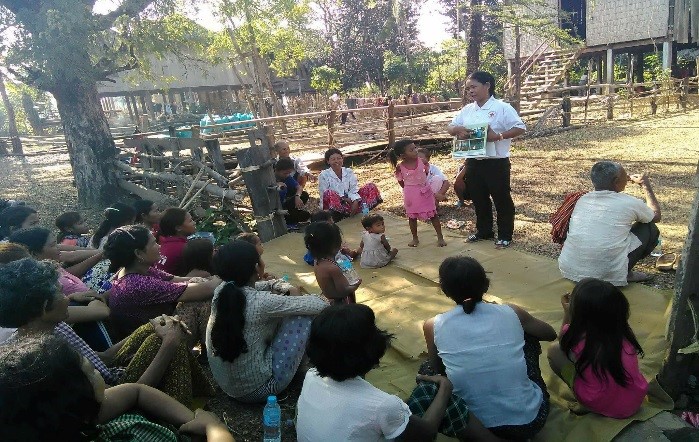 • Por and Lovea villages: Red Cross Volunteer (RCV) home visit to create awareness regarding the treatment of water and safe storage. There was also monitoring of water infrastructure (hardware) and discussion with village WASH committee for coverage of household sanitation. 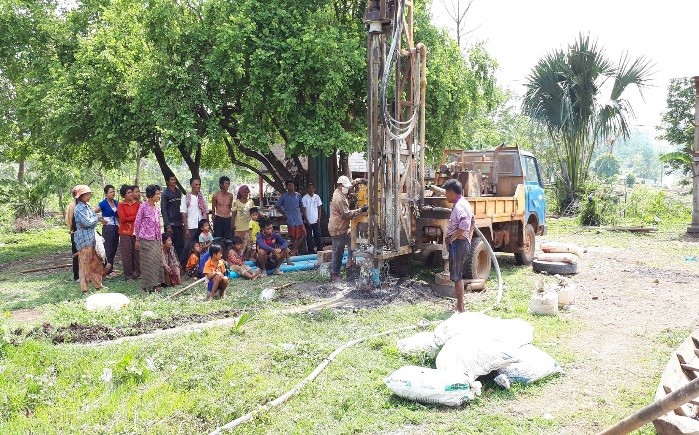 5-26 April 2017: Construction of water facilities was started for 4 shallow tube wells in Por and Lovea villages in Boseleau commune, Chitr Borei district, Kratie province. The time schedule for completion of the activity is in July 2017 and it is going to benefit approximately 280 households. Currently the water source, location and land have been identified and drilling has started. RCV quarterly meeting on programme issues and achievements: RCV meeting was organised to understand the issues regarding the programme and various achievements and quarterly progress of the programme. The following issues were identified: –
a) Accessibility of the villages during the rainy season, the condition of road is inaccessible
b) Progress of water sources was delayed due to rainy season

Quarterly progress was discussed with RCVs and staff of the sub-provincial branch and recommendation and additional Participatory Hygiene and Sanitation Transformation (PHAST) and Hygiene Promotion (HP) toolkits were provided to RCVs. Svay Rieng province’s WASH team celebrated and created awareness on World Water Say in the theme of “Why waste water?”

The Cambodian Red Cross volunteers also conducted the practical sessions on hand washing for children and on the waste water usage by watering of plants. 9-15 March 2017: Hygiene promotion and education session on fecal transmission route, diseases and environmental cleaning at a school and community

On 9-11 March 2017 there was a hygiene promotion and education session on personnel hygiene and benefits of latrine which was briefed to two schools in Boseleav commune, Chitr Borei district and the villages. The provincial staff explained the new facility provided to the schools, i.e. school latrines, water facilities for drinking. They also disseminated the information regarding fecal transmission route, diseases and environmental cleaning. Two emergency water purification units (AP700CL) were handed over to the Secretary General of the Cambodian Red Cross Society on 11 January 2017 at the National Headquarter, and on 19 January 2017 was handed over to the Director of Prey Veng Provincial Administration.Three e-WASH-training is scheduled for 5-12 February 2017 in Prey Veng province with an aim to enhance the capacity of the National Society for WASH emergency response in the future. Village Cleaning Exercise: The village community participated in the village cleaning exercise and cleaned their surroundings to prevent diseases like malaria, dengue, etc. Water source developement was done for Toul Sdey villages in Svay Rieng province. Solar panels were installed in the villages and they were handed over to the villages’ WASH Committee. Now 400 households have access to water at their premises. Water source development was done by the construction of 3 shallow-tube well with hand pump facility in the sub-village of Por (Prek Taam main village), Chitr Borei commune, Kratie province. It was completed in November 2016 and benefits overall 207 households (1053 peoples)

The purpose of this visit was to build up partnership and relationship among Cartier Charitable Foundation, International Federation and the Cambodian Red Cross and also to learn the progress of WASH project, a three year (2015-2017) community based project  implemented at targeted branches of Svay Rieng, Kratie, and Banteay Meanchey provinces.