The initial trainings for the field research on sexual and gender-based violence took place on from 9-14 May 2017 in Lao PDR. As part of this research project, all data collection teams have to be trained for six days. The trainings include sensitization on sexual and gender-based violence issues, introduction to the questionnaire and focus-group discussions (FGDs) and multiple practice sessions to ensure that the research is carried out in an ethical, safe and confidential manner.

The training was six days long with a series of debrief meetings on the seventh day. 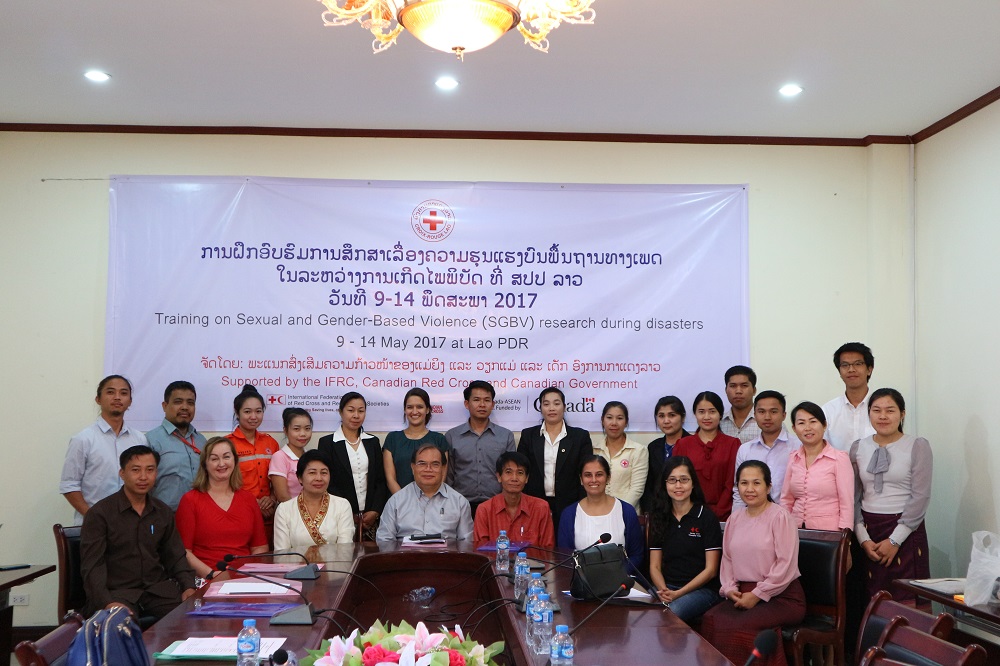 Key sessions included:
1) An overview of what SGBV is, how it is different during disasters and how to define specific types of SGBV, including sexual violence, domestic violence, early/forced marriage and child sexual abuse. The multi-sectoral response for a survivor was also explained and reviewed. Participants were tested on their knowledge through a series of quizzes and case scenarios, including the gallery walk.
2) Detailed overview of the guiding principles, an ethical approach to data collection and prevention of sexual exploitation and abuse. The same key messages were reviewed every day during the training, including:
– gender inequality is the root cause of SGBV
– Putting the survivor at the center through the guiding principles: Safety, Confidentiality, Respect and Non-discrimination
– Definitions of SGBV
– Code of conduct during fieldwork
– Stress management for the data collection team
3) An in depth session on key sections of the fieldwork manual for data collectors, including duties and responsibilities of each team member, explanation of the full questionnaire and the rationale behind each question, explanation of the Focus Group Discussions, review of keeping safe in the field and how to implement the guiding principles of safety, confidentiality, respect and non-discrimination during interviews. Each team member had to sign a pledge of confidentiality and ethics and the Lao Red Cross child protection policy.
4) An overview of the open data kit (ODK), what it can and cannot do in the area of information management and how to use the hand held devices. This is also a key area in the fieldwork manual. Field supervisors also had an additional orientation session in which they learned how to manage the devices, including charging the phones, uploading of forms and how to review forms at the end of the day for mistakes.
5) Sharing of cultural considerations by the field supervisors coming from the Oudomxay and Sekong provinces on cultural practices and traditions the data collectors may have to face during field work. The most disaster affected villages include a number of different ethnic groups, who speak different language and have unique cultural rituals.
6) Two Lao Government representatives, one from the National Commission on the Advancement for Women (NCAW) and the National Statistics Bureau, shared their experience of working on the UNFPA supported 2014 National Level Prevalence Survey on Violence Against Women and Girls. This session reviewed the most important Do’s and Don’ts for the data collectors in the field (please see checklist below) and also gave further insight on how the field supervisors can finalize their fieldwork plan and do effective household respondent selection.