The CRC representatives met with Helen Brunt, IFRC Senior Migration Officer, from 28 November to 1 December 2017 to discuss on migration issues. The meeting was aimed to i) discuss AoF7: Migration with leadership, staff, and volunteers of CRC, including scope for potential IFRC support and National Society peer-to-peer exchanges, ii) meet with key local authorities in Preah Vihear Province and support CRC in their auxiliary role and relationship with the Cambodian Government, and iii) learn more about CRC’s Restoring Family Links (RFL) and ‘safe migration’ awareness-raising activities.

The visit provided IFRC a unique opportunity to experience first-hand activities conducted by CRC related to migration. Since the start of 2017, ‘Safe migration’ messaging has been included in awareness-raising activities primarily focused on RFL and ‘safer rural communities’ in Preah Vihear Province which borders Sisaket Province in Thailand – an initiative supported by ICRC.

This mission to Cambodia also provided the opportunity to meet with leadership of CRC and share updates on IFRC’s Global and Regional Migration Strategies and plans, as well a meet with local government officials and introduce the RCRC Movement’s humanitarian mandate in relation to migration and cross-border movements of people in the Mekong region.

Several reports show that Cambodian has seen a gradual decrease of domestic violence against women and girls since 2000. However, according to Cambodia Gender Assessment in 2014, there are still number of challenges facing the country in its effort to end gender-based violence (GDV), including but not limited to:

Between 25 November to 9 December 2017, CRC conducted activities under the campaign “16 Days of Activism Against Gender-Based Violence” on the topic “Leave No One Behind – End Violence Against Women and Girls.” The expected results and measurements for success include:

Number of activities were conducted at four universities, with 872 students participated, from 25 November to 7 December. The activities included a mix of brainstorming, plenary discussion, presentation, and Q&A facilitated by the resource persons from the Ministry of Women Affairs.

On 9 December, CRC conducted a special event at the CRC National Head Quarter with 200 participants including representatives from the Ministry of Women Affairs, CRC leaders, staff, Red Cross youth and Red Cross youth advisors, deans and directors of universities, students, Red Cross partners, and other stakeholders).

Total number of participants attending in the 16 Days Activism was 1,072 participants, of which about 40% are female. 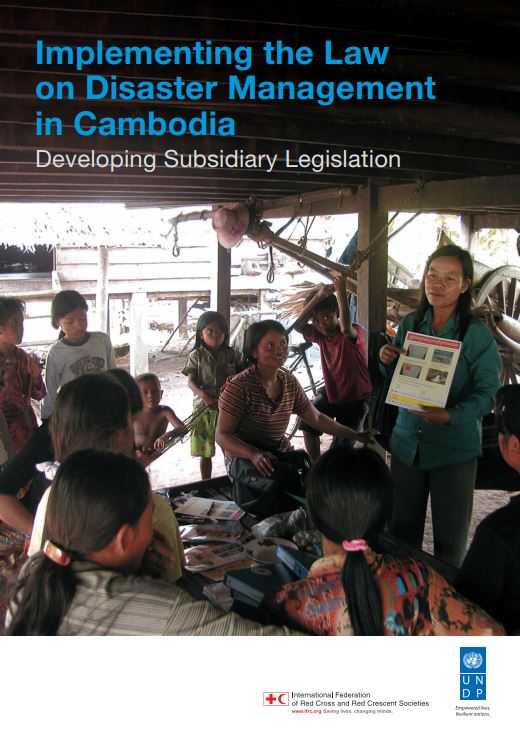 In June 2015 Cambodia’s legislature passed the Law on Disaster Management (DM Law). This represents a major shift from an institutional system for disaster management based only on subsidiary legislation, which had been in place since 1995, to a broader and more authoritative legislative mandate on disaster management

The DM Law, like most legislation in Cambodia, provides an ‘umbrella’ mandate that relies on subsidiary legislation to be made by the executive branch, the Government of Cambodia, to provide for more detailed implementation.

The discussion in this report has focused on implementing the DM Law through the subsidiary legislation mandated within the law itself. The recommendations for development of substantive decrees are based on the specific provisions that require them, and the overall objectives and goals of the DM Law. An effort has also been made to address the key challenges identified by stakeholders and reviews of the pre-existing system. The report includes some additional areas proposed for subsidiary legislation for consideration of the government, which are not mandated by the DM Law, but fall within its general scope. 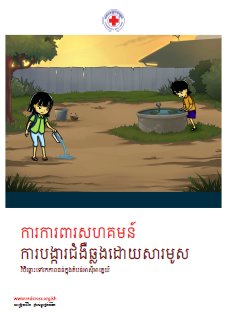 This comic book in Khmer is a children-friendly tool to support school safety by raising awareness and prevention of mosquito-borne diseases such as dengue, zika and chikungunya, with the key messages: clean up, cover up and keep it up.

For versions in other languages, see: 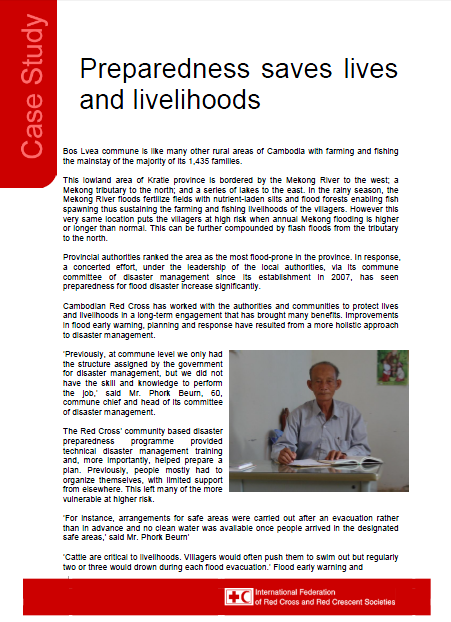 This case study discusses Cambodian Red Cross’ works with the authorities in Kratie province which is bordered by the Mekong River, to protect lives and livelihoods in a long-term engagement that has brought many benefits. Improvements in flood early warning, planning and response have resulted from a more holistic approach to disaster management, which are sustained through local capacity and leadership. 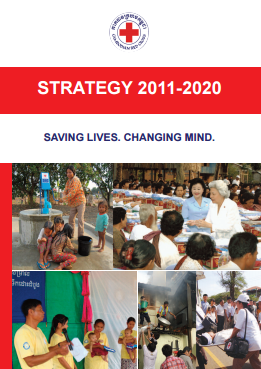 The Strategy 2011-2020 – a compass to guide the Cambodian Red Cross (CRC) in designing of sector strategic plan, short, mid and long term development plan, for implementation with clear indicators and expected results, so that the national society will achieve its stated humanitarian mission in the next ten years.

This Strategy has been developed when the CRC reaches its last year of implementing the Strategy 2003-2010. The participatory development process started with a wide consultation among CRC governing boards and the management teams at the national headquarters and the 24 branches the Red Cross partners. The participation is up to 300 people.