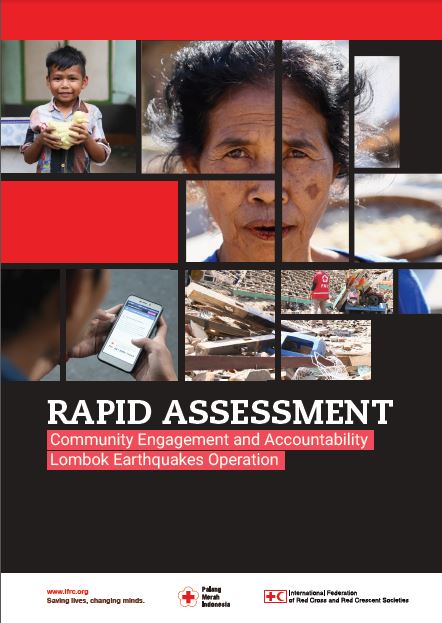 On 29 July 2018, a 6.4 magnitude earthquake struck off Lombok in the province of West Nusa Tenggara, Indonesia. A second, larger earthquake of 7.0 magnitude occurred on 5 August 2018, and was followed by thousands of aftershocks (data from Indonesia’s Agency for Meteorology, Climatology, Geophysics – Badan Meteorologi, Klimatologi dan Geofisika). The earthquakes affected 509,600 people across five districts including North Lombok, East Lombok, West Lombok, Central Lombok and Mataram city, with 560 deaths and 7,757 injuries. At least 396,000 people have been displaced in the series of devastating earthquakes. Seventy-five per cent of buildings in North Lombok were damaged or demolished including 577 school buildings (data from National Disaster Management Agency – Badan Nasional Penanggulangan Bencana).

The Indonesian Red Cross Society (known as Palang Merah Indonesia – PMI) conducted a rapid assessment on information, communication and accountability in response to devastating earthquakes on Lombok island, Indonesia. Some 257 people from severely affected communities including North Lombok, East Lombok and West Lombok took part in this assessment, held through focus group discussions and interviews. Information from government institutions and aid agencies also contributed to this report. The key findings include information needs of the affected people, their preferred communication channels, feedback mechanisms, and decision making process in the communities to consider for integration in the programme designs for this response.

No ratings yet.
Tagged on: Community engagement and accountability    Indonesia
Preeti Abraham November 20, 2018 Indonesia No Comments