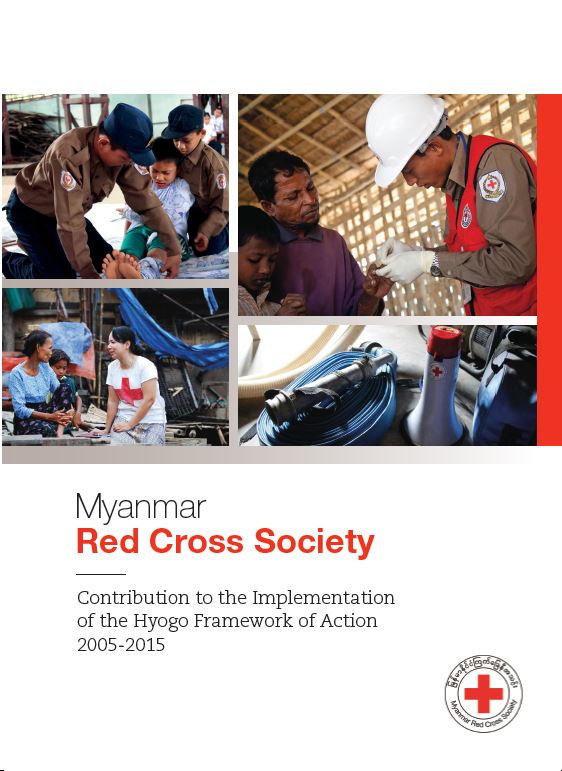 The report captures the achievements made by the Myanmar Red Cross Society and its network of over 40,000 Red Cross volunteers towards the Hyogo Framework for Action (HFA) strategic goals and five priorities.

Since 2008, the Myanmar Red Cross Society (MRCS) has contributed to the country’s disaster preparedness and disaster risk reduction efforts. MRCS has proven itself a critical responder in emergency situations through its actions during the various disaster events that have severely hit Myanmar over the past decade.

Although there is wide recognition for its role in the promotion of safe and resilient communities across Myanmar, no detailed analysis has been carried out on the direct contribution of MRCS to the country’s disaster risk reduction commitments.

The Hyogo Framework for Action is the internationally accepted instrument that defines the goals and issues that governments in all countries need to target to reduce their disaster risks. In light of the important MRCS role in disaster risk management, this report presents analysis of its contributions towards achieving the five priorities defined in the Hyogo Framework for Action 2005–2015.

For the report, MRCS projects and activities from the past ten years were reviewed against the indicators included in the Hyogo Framework for Action. The analysis is based on desk research and interviews with key informants carried out in August–October 2014.

Through the analysis and follow-up consultations on the initial drafts of this report, it is clear that MRCS is an important player in disaster risk management in Myanmar. MRCS has contributed to all five Hyogo Framework priorities, with a particularly large contribution to the fifth priority for action: Strengthen disaster preparedness for effective response at all levels. The report cites details the MRCS contribution to each of the indicators under all five priorities.